Is It Illegal to Talk on the Phone While Driving in Georgia? 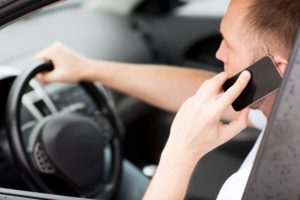 Georgia’s distracted driving law can confuse some motorists. The law prohibits texting while driving. However, it is not always illegal to talk on the phone while driving, which is where the questions arise. As a result, when a driver causes an accident while talking on the phone, an accident victim may be unsure of whether he or she can file a claim against that driver.

For this reason, it is important to speak with an experienced personal injury lawyer after you have been injured in a suspected distracted driving car accident. An attorney will be able to determine if the other driver was unlawfully on the phone at the time of the crash, and if so, whether that violation of the law caused the crash. At Sherrod & Bernard, P.C., we have decades of combined experience with these types of cases in Douglasville and throughout Georgia. We are ready to put that experience to work for you.

What Is the Georgia ‘Hands-Free’ Law?

When using voice technology with their phones, drivers can write e-mails or texts and perform other functions. However, they cannot manually write those texts or e-mails. They also cannot read e-mails and texts. Yet, through voice commands, they can have those e-mails and texts read to them.

If drivers want to listen to music on their phones, such as through a streaming service, they can do so. However, they cannot program the service or touch the phone in order to switch playlists, adjust the volume or do anything else that requires touching their phone.

Drivers that are convicted of a first offense will face a $50 fine and one point on their driver’s license record. A second conviction increases the fine to $100 and leads to two points on the driver’s record. Three convictions or more will result in a $150 fine and three driver’s license points. Even though these fines are steep, the more important reason for drivers to follow the law is their safety and the safety of everyone else on or near the road.

Georgia, like many other states, now has strict anti-distracted driving measures in place. However, many people wonder if these laws really work. Will they make our roads safer?

A recent study by Cambridge Mobile Telematics actually found that “these laws only modestly dissuade hand-held distraction.” For example, in states with laws that prohibit all hand-held phone use by drivers, the average number of minutes of significantly distracted driving per 100 miles of driving was 3.17 minutes. In states with no laws against hand-held phone use, that average was only slightly longer – 3.82 minutes.

The reality is that drivers simply like to have their phones nearby, and they cannot resist multi-tasking when they are behind the wheel. When they get a text or e-mail, it may seem more important to them than focusing on the road ahead. This is especially true when people try to take care of work-related matters with their phones while they are driving.

Even when another driver violated a traffic law and is negligent per se, accident victims must still prove that the driver’s violation caused the accident. For example, if a driver ran a stop sign, that’s a violation of traffic law. However, if that violation did not cause the crash, then the driver that ran the stop sign could not be held liable. The same is true for distracted driving. You must not only prove that another driver was distracted. You must also show that the driver’s distraction caused the crash that resulted in your accident and injuries.

How Do You Prove a Driver Was Distracted?

So, to establish liability in a distracted driving accident case, you will need to prove the other driver was distracted, and this negligent act caused the crash. This is where the assistance of an attorney can be particularly helpful.

An attorney can subpoena the driver’s cell phone records to prove that the driver received a text or an e-mail at the time of the crash or just before it happened. An attorney can also take steps to obtain event data recorder information, or black box data. This data can show whether the driver took actions such as hitting the brakes just before the crash. If the driver did not use his or her brakes, it may reveal that the driver was too distracted to even see your car. If law enforcement was called out to the crash and determined that another driver was driving while distracted, it’s also possible to ask for a copy of the accident report.

Our Distracted Driving Accident Lawyers Can Help You

All serious car accidents can be confusing and leave victims wondering what to do next. At Sherrod & Bernard, P.C., our Douglasville distracted driving accident lawyers know the steps to take and the evidence to collect to establish whether another driver was at fault. We also have the experience to hold insurance companies and at-fault parties accountable for paying the compensation you deserve. Contact us today to meet with one of our attorneys and learn more about how we can help with your case.